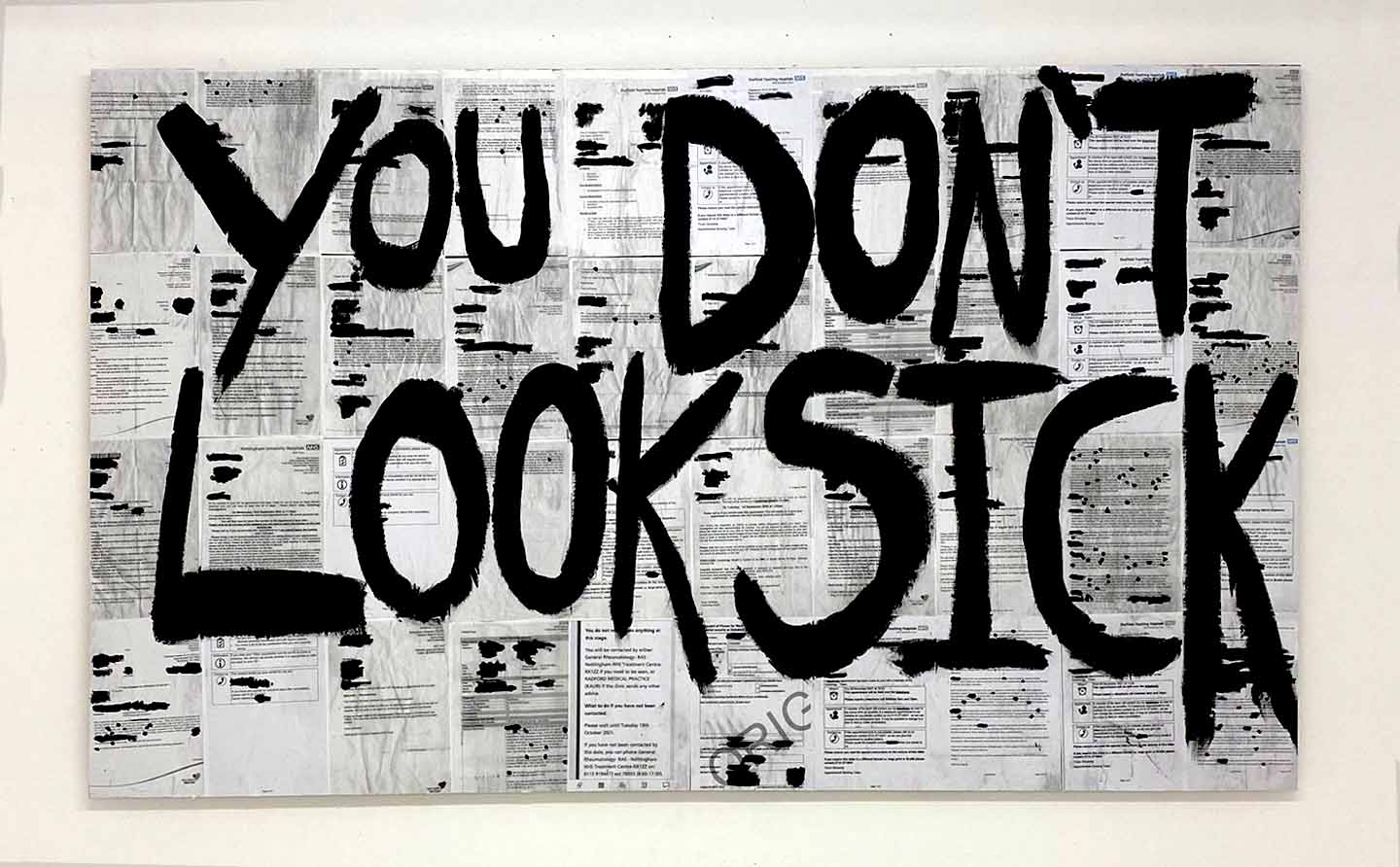 'You don't look sick' by Chloe Burns has had over 2,000 shares on social media

We love art that makes a statement. Something that gets the brain ticking and makes you think. Recently we stumbled across a work of art on social media that did exactly that. And we weren’t alone in our opinion… in fact the image has been shared over 2,200 times.

The artwork in question was created by 22 year old art student Chloe Burns, who is currently in her final year at Nottingham Trent University. It consists of 48 A4 sheets of her own medical notes with the words ‘You don’t look sick’ written across them, which is also the title of the piece.

When we first saw the images on social media we were immediately blown away by them. For us it does everything art needs to do. It’s a powerful piece that just stops you in your tracks and from reading the many positive comments from viewers it was clear it resonated with a lot of people.

For Chloe, this is a very personal piece. It’s a statement of frustration showcasing the prejudices and discrimination she has had to endure as someone, who in the last year, has been diagnosed with Postural Tachycardia Syndrome which is more commonly referred to as PoTS.

“My piece ‘You don’t look sick’ discusses the discrimination and prejudices I’ve had to deal with over the years from family, friends and co-workers. I’ve even had paramedics accuse me of being a typical student suffering from a night out which is absurd as I rarely drink due to the risk of flare ups.

Sadly, and frustratingly, the human instinct is to take things at face value rather than appreciate that not all illnesses are visible. If I had a wheelchair or a crutch the response would be very different”, explained Chloe.

So what exactly is PoTS?

If like us, you’ve never heard of it before, PoTS, according to the NHS website, is an abnormal increase in heart rate that occurs after sitting up or standing. Some typical symptoms include dizziness and fainting and affects a range of people, but is most common in girls and women aged 15 to 50.

This is obviously a very simplistic description and in our conversation with Chloe she told us that there is actually very little known about the condition with no official treatments or cures.

For Chloe, it’s been a lifelong journey trying to find out exactly what was wrong. In her earlier years it was simply brushed off as anxiety until the symptoms became worse two years ago.

Having been an avid and talented dancer, which she incorporated into her video work, ‘You don’t look sick’ is Chloe’s first major painting as her condition has forced her to re evaluate how she expresses herself through her art.

‘Not being able to dance any more was devasting. I felt lost. I’d won art awards for my videos and didn’t know what I was going to do. This condition is always on my mind, but I decided I could either use my practice to escape from it or embrace who I am and what I’ve gone through and discuss my thoughts and feelings in my work… I chose the latter”, said Chloe.

And we’re very glad she did. This decision to accept and allow this new work to showcase her feelings has resulted in this stunningly powerful piece, and there’s more to come.

According to Chloe, there are many more pieces now in the pipeline based on raising awareness of these ‘invisible illnesses’ and we for one, can’t wait to see them.

Life can be very cruel sometimes but we love Chloe’s attitude and determination to use the cards she’s been dealt to help drive change in people’s attitudes and look forward to seeing more of her work in the future.

Due to the incredible response to her work, Chloe is now offering prints of ‘You don’t look sick’ with 5% of proceeds going to Disability Rights UK

Follow @chronic_cg on social if you’d like to see more of Chloe’s work or grab yourself a print.

Are You Ready… Next